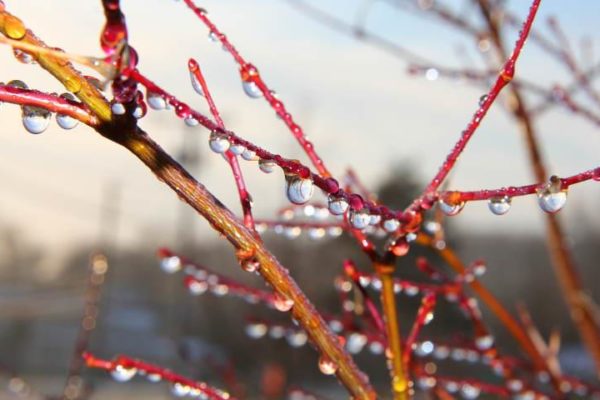 Replace traditional limb-by-limb method by starting over, one tree at a time

With a rev of his chain saw, Antonio Santillan whacked all the limbs of a 13-year-old KGB Chelan cherry tree down to nubs, leaving behind a waist-high clump of branches surrounded by a litter of cuttings in the snow. Lynn Long, center, in black coat behind box speaker, of Oregon State University Extension discusses the finer points of whole tree renewal pruning at an annual winter pruning workshop in December near The Dalles, Oregon. The technique, though seemingly drastic, involves cutting all the limbs of a cherry tree back at the same time to ensure balanced renewal growth. (Ross Courtney/Good Fruit Grower)

“Beautiful,” said Oregon State University Extension horticulturist Lynn Long to a chorus of laughter from a crowd of 30 or so growers at his winter pruning workshop Dec. 13, 2016, in John Byers’ orchard in The Dalles, Oregon.

Santillan’s hard-core tree trimming demonstration provided attendees a close-up view of whole tree renewal, an experimental method of winter pruning that starts an entire tree over at one time.

“This is an option we need to be considering,” Long said.

The technique feels drastic but can be done in a way that has no more impact to an overall orchard than traditional renewal pruning, often called selective renewal pruning, a method that requires growers to renew older fruiting branches each year.

Cherry trees produce the best quality fruit on young spurs, so orchardists typically prune out the oldest of their limbs each year at a rate that completely renews the fruiting wood every five or six years.

That has risks, however, Long said. Stub back only one thick branch and it may cause an imbalance, transferring the growth energy to other branches growing from the same fork, forever robbing the tree renewal growth at that spot and the grower of productivity.

Sometimes, renewal cuts simply fail, whittling away the productivity of the entire tree for the rest of its life.

Pruning entire trees to stubs — Long recommends 15 percent of the trees in an orchard each year — will create uniformity among the branches and maintain a workable renewal schedule. The technique is best suited for UFO and KGB training systems, he said.

The method may make pruning, one of the more expensive seasonal chores, cheaper and simpler.

Pruning an entire tree will remove some of the most difficult decision making for hired pruners and may make the job itself more inviting to seasonal laborers, Long said.

In the end, a tree with uniform growth also will be more attractive to pickers come harvest time, he said, pointing out a neighboring tree that had been renewed three years earlier in contrast to the rest of the block that had been traditionally pruned.

The renewal pruned tree had evenly spaced vertical fruiting branches all about the same size, all small enough that a harvester could easily bend them and reach the tips from the ground.

“You can see the difference in a tree like this, how much friendlier it is for your pickers and also for your pruners than those that we’ve been battling right there,” he said. Byers, owner of Byers Orchards and a member of the Oregon Cherry Growers cooperative, has used whole tree renewal at times when his older KGB trees didn’t live up to his productivity goals. One of John Byers’ KGB Chelan trees, stubbed all the way back with the whole tree renewal in 2015, shows balanced growth of new fruiting wood in December 2016 with more than 20 fruiting uprights, each easily bendable to allow pickers to harvest without a ladder. (Courtesy John Byers)

However, he has never tried Long’s suggested systematic approach.

Any aggressive form of pruning takes nerve because growers purposely remove some branches from production for two years. The branch reaches full production in the third year, typically.

For example, when establishing young KGB trees in the first three to four years, sometimes growers are reluctant to make what Byers calls the “fifth” cut, which will increase a tree’s fruiting units from about 14 to 25 over time as the tree develops.

“I call it the fifth cut because you got to have a fifth in order to make it,” Byers told the crowd.

Each pruner must debate when a branch is thick enough to willingly cut away its short-term production. Whole tree renewal as a routine would make the decisions simpler, even if it seems drastic.

Byers calculates his cost and revenue per acre, meaning he does the math in his head watching his trees cut back to nubs. It could cost him $12,000 per acre over the first two years before the tree returns to full production in year three.

“You’re in the cherry business; everything takes nerve,” Byers said. “You wouldn’t be in this business if you didn’t have the ability to take that loss.”

Neighboring grower Mike Omeg first became a fan of whole tree renewal when he visited Michigan State University’s research plots with horticulturist Greg Lang in the fall of 2015. At the same time, he was forced to restart a few acres following heavy winter damage.

“We tried some of it because we didn’t have a choice after the 2014 freeze,” said Omeg, who did not attend the workshop. Other growers in The Dalles suffered damage from the same freeze.

With Lang’s ideas in mind, Omeg paid extra close attention to how his damaged trees regrew and liked what he saw. He then tried whole tree renewal pruning before the spring of 2016 on a few undamaged acres. He plans to try even more after the 2017 harvest.

Omeg also sent some of his crews to help Long run whole tree renewal trials elsewhere, where Long not only studied the reaction of the trees but the time the workers spent on the chore of pruning. Whole tree renewal was several times faster, Omeg said. Pruning is the second most expensive labor line item on his yearly budget behind harvest.

Also, Omeg tried the same technique on central leader trees, cutting the central leader all the way back to knee-height. The trees grew back to between 10 feet and 14 feet tall in one year and are filling their spaces both horizontally and vertically.

Omeg admits the technique needs more testing and experimentation, but he already is building it into his future.

In 2016, he planted new cherry blocks with fertigation valves that will allow him to use whole tree renewal pruning on entire sections at a time.

He’s considering a five-year renewal rate, which means renewing 20 percent of his trees each year.

Trees pruned all the way back have different nutrient requirements than trees with mature branches, one of the drawbacks of performing whole tree renewal on established blocks.

One of his biggest questions is why he never thought of it before. “This is what keeps farming fun.”